The Take It Back movement’s campus unit has condemned the federal government’s “budget of poverty and hardship” and called for the immediate release of Omoyele Sowore and all other political prisoners. This was at a press conference it held on Friday 18 September at the Rights House, headquarters of the Committee for the Defence of Human Rights (CDHR), in Ikeja, Lagos.

In the statement presented to the press, Comrade Juwon said the TIB Unit condemned the “draconic bail conditions imposed on Omoyele Sowore and Olawale Adebayo” in “outright terms”. It may be recalled that the federal government filed spurious charges against Sowore on 20 September.  Five days later, Justice Taiwo Taiwo granted him bail. But the Department of State Services disregarded the bail order an act which itself is contempt of court, and subsequently manoeuvred for a fresh bail order on more stringent conditions by Justice Ijeoma Ojukwu on 4 October.

These draconian conditions, as the TIB Campus Unit rightly puts it include: a N100m bail bond for Sowore and N50m for Olawale “Mandate” Adebayo; a gag order for them not to address the press and insistence on their staying in Abuja for the duration of the case, despite the fact that they have no residence in that city and were arrested in Lagos and Oshogbo respectively.

The two activists have filed an application for bail variation from the court through their lawyer, Femi Falana (SAN). Justice Ojukwu has fixed hearing on this for 21 October. All eyes will be on the federal high court Abuja on Monday to see justice done. Hundreds of TIB members from campuses across the country intend to be in court that day for this purpose.

Comrade Juwon equally condemned the “unwarranted attack, incarceration, trial” and rejection of bail application of Agba Jalingo in Calabar, Cross River state. Jalingo, who is equally a member of the National Executive Council of the African Action Congress which Omoyele Sowore is National Chair of, is the editor of Cross River Watch, the newspaper which exposed high corruption in the PDP-led government of Governor Ben Ayade in the state.

This goes to show that the entire ruling class, cutting across its two major parties (APC and PDP alike) are rotten through and through and back their shameless rapacious looting and pillage of resources that should be used to better the lot of poor working-class people and youth with brazen repression.

The suppression of press freedom has become the stock in trade of governments at all levels. Several citizens being illegally held on politically motivated grounds are journalists. These include Stephen Kefas, Jones Abiri and Abubakar Idris (also known as Abu Hanifa Dadiyata). The TIB Campus Unit equally demanded their immediate release.

State repression reflects the fear of the bosses. They fear the resistance of the masses as activists and journalists reveal the inner workings of how the rich 1% keep enriching themselves while the lives of the immense majority of the population keep getting worse. There is no country in the world with as much poor people as in Nigeria. Yet, they are piling up more and more hardships for working-class people.

The Take It Back Campus Unit thus equally drew attention to further attacks on workers and youth which the 2020 budget proposal of the federal government represents. Noting that “the government is self-serving and must be resisted by all Nigerians”, Sanyaolu Juwon pointed out the brazen contradiction in allocating just N48bn to education in a country with an estimated number of 40million pupils and students (and with the largest number of out of school children of primary school age in the world i.e. 10-13million) while N125bn is allocated to a national assembly with just 469 persons.

As it was noted during the conference: “The implication of this dangerous underfunding is that students and their poor parents would be exposed to arbitrary and astronomical fee hikes in the face of growing and unprecedented poverty”.

This “unprecedented poverty” is set to get worse in the face of a wage review which in real terms amounts to wage cuts, in terms of purchasing power compared to the 2011 wage review on one hand, and introduction/increase of a myriad of taxes and fees such as VAT (44% increment), communication tax, communication service tax, banking tax, soft drink tax, stamp duty, National ID renewal/issue fee as well as proposed re-introduction of toll gates.

But this does not have to be the case. As the TIB youths stress, drawing from the battle cry popularised at the turn of the century by the social forum process “another Nigeria is possible!” This can only be won by struggle against the exploitative and oppressive ruling class which has made living nothing but a hell on earth for the poor masses.

As they stated in rounding up the press conference: “if we fight, we may win, but if we don’t, we have already lost!” Working-class people and youth must dare to struggle and dare to win. Socialist Workers and Youth League fully supports the unfolding struggle of the working masses for a better society devoid of domination by this ruling class of exploiters, where we the people would run society and utilise our wealth (which the 1% presently feed fat on) to make our lives better for us.

And thus, we raise high the flag of #RevolutionNow! Join the struggle for our collective self-emancipation NOW!! 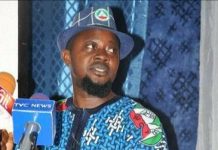 January 24, 2020
Nigerian trade unionist and activist, Lai Brown, argues that annual debt servicing in the country has a debilitating impact on the poor. In a...