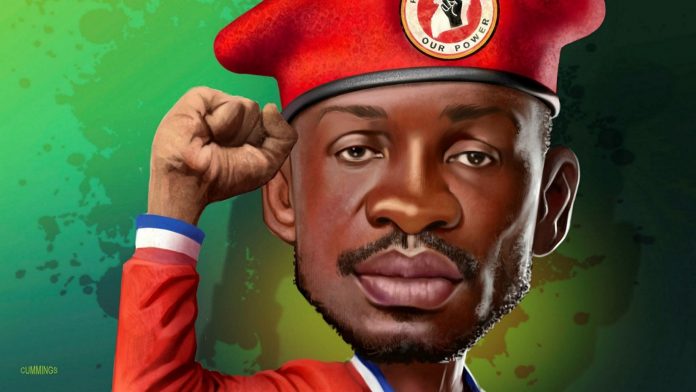 The Ugandan president, Yoweri Museveni was proclaimed winner of the 14th of January general elections, with 58.6% of the votes. He has been in power for thirty-five years with his National Resistance Movement (NRM).

The elections were described as “fundamentally flawed” by some observers. But the British government declared them “relatively calm” and welcomed the results. Rulers of several African countries, including Kenya, Sudan and Tanzania, also congratulated Museveni immediately after the elections were declared, even while votes were still being counted.

The leading opposition figure, 39-year-old Robert Kyagulanyi Ssentamu, popularly known as Bobi Wine of the National Unity Platform (NUP) secured 34.8%, according to the official figures. And he was immediately put under house arrest for two weeks, for protesting brazen electoral fraud and voter intimidation.

The repression of Bobi Wine as well as supporters of his “people’s power movement” and party started long before the elections. His driver was shot dead by the police in 2018, while Wine and his followers were supporting Kasiano Wadri, an independent candidate for the Arua municipality in a bye election. He was then charged alongside almost thirty others, for treason (after an earlier charge of possession of firearms was easily debunked).

The crackdown grew intense in the months leading to the elections. Members of the NUP were harassed, beaten up and arrested. NUP offices were raided and party materials carted away. Obstacles of diverse sorts were also put in their way to prevent campaign activities.

Bobi Wine himself was arrested during his campaign in November, supposedly for violating COVID-19 regulations. This led to widespread protests in which at least 37 people were killed by the police. Hundreds of people were injured, some of these quite severely. Wine was arrested again in December and his campaign rally dispersed.

The government also tried to influence voting with fake social media accounts. When these were identified and closed by Facebook, the government shutdown access to internet on the eve of the elections. Facebook management is of course not a politically neutral body. It has also closed or blocked the accounts of radical activists across the world at different times.

But the government only used Facebook’s action as an excuse to block internet access. It was part of the usual repressive tactics of Museveni’s government, and an attempt to undermine the flow of information while it perfected its rigging strategy. The same thing was done on the eve of the 2016 general elections.

Despite the draconian measures of the dictatorial NRM regime, NUP emerged as the largest opposition party in parliament with 61 seats. But the NRM still has absolute majority, commanding 316 out of the 529 parliamentary seats. Wine sees his political project as a political revolution. And he told the party’s parliamentarians that “this is not a time to put on smart jackets and go to parliament and enjoy”.

These are bold and encouraging words. As activists, we fully support the NUP against the Museveni dictatorship. We must also draw lessons from the development of the people’s power movement’s politics.

Bobi Wine gained fame as a musician noted for challenging the regime’s oppression in his songs. Resting on this popularity, he contested and won a seat in parliament as an independent candidate in 2017. This was after the Forum for Democratic Change (FDC) which was the main opposition party at the time refused his application to run on their platform.

His campaign was driven by the “people’s power – our power” movement; a loose network of activists, which cut across opposition parties. With more than three quarters of the country’s population being under thirty years, the movement is largely youth-based and makes vibrant use of social media for mobilisation and organising.

Bobi Wine was a clear voice that spoke out against the fraudulent constitutional amendment sponsored by NRM in 2018 to remove all limits to running for presidency. This was used to pave the way for Museveni’s sixth shot at the presidency this year. In preparation to contest the presidential election, Wine joined and took over the former National Unity, Reconciliation and Development Party (NURP) in 2020. NURP was formed in 2014 by Moses Kibalama, a former police officer who is now chief executive officer of an economic processing zone (EPZ).

Several other opposition parliamentarians and even a few from NRM joined the NUP with Wine. And the party came up with “A New Uganda” 47-page manifesto, based on four pillars: people-centred governance; equal access to quality education and health services; inclusive economic development; land, natural resources, and environmental protection; and national security and international relations.

Poor governance, corruption and incompetence are presented in this programme as the primary reasons why social progress has been undermined in the country. A few progressive steps are offered to address these. These include, curbing institutionalised corruption, increasing the participation of women in government, and blocking illicit financial flows to some extent.

Bobi Wine and the NUP do however fail to see the structural basis which the ills they have identified rest on. This is the for-profit nature of capitalist relations which enables a handful of people to get richer while the majority wallow in poverty. A thorough revolution from below cannot stop at the limited aims of the NUP.

Working-class people and youth represent the social base of NUP. Most of the party’s votes were won in poor working people’s districts and parts of the country, including the capital Kampala. What the mass of poor workers, informal economy operators and unemployed youths who voted for it want is to break the shackles of their suffering. This can be done only through political struggle based on a socialist programme. Only this reflects and safeguards working-class people’s power.

Some people have described Bobi Wine as lacking an ideology. He thinks so himself, as demonstrated by his response to an interview question on radio in July 2020. When asked if his economic system will be based on left-wing or right-wing ideology, he said he was neither to the left or to the right and would simply use whatever works.

The futility of this “pragmatic” approach is however revealed by the capitalist economist and ideologue, John Maynard Keynes, when he said; “practical men, who believe themselves to be quite exempt from any intellectual influences, are usually slaves of some defunct economist.”

The rise of Bobi Wine and the renewed NUP in Uganda is part of a wave of radical-reformist politics on the continent, and indeed the world at large. We see this trend in several countries, such as South Africa with Julius Malema and the Economic Freedom Fighters (EFF), as well as in Nigeria with Omoyele Sowore and the African Action Congress (AAC).

The general context in which they have arisen is that of mass anger in response to deepening social and economic crisis on one hand and a weakened or, as in the case of Uganda, almost non-existent revolutionary left movement, on the other.

While taking note of particularities of each of these parties which have ignited the revolutionary passions of teeming masses, even if with radical-reformist programmes at best, it is not for socialists to dismiss them. Our primary tasks are to patiently carry out political education within the ranks of these parties where we can, to deepen the influence of consistently revolutionary ideas, lay the bases for the parties’ formulation of class-based agendas and enhance their practical struggles for improving the lives of the working masses as integral elements of winning the aim of system change.

We thus support the struggle of the NUP in Uganda even as we firmly stress the need for a clear-cut-cut socialist agenda as the only sure basis for revolutionary change in the country, as part of the global struggle for system change.

We Must Stop “Vaccine Apartheid” to Defeat COVID-19 Globally

The Massacre in Zamfara: Matters Arising

January 14, 2022
The year started on a bloody note in the Northwestern state of Zamfara. More than 200 people were killed in the first week of...