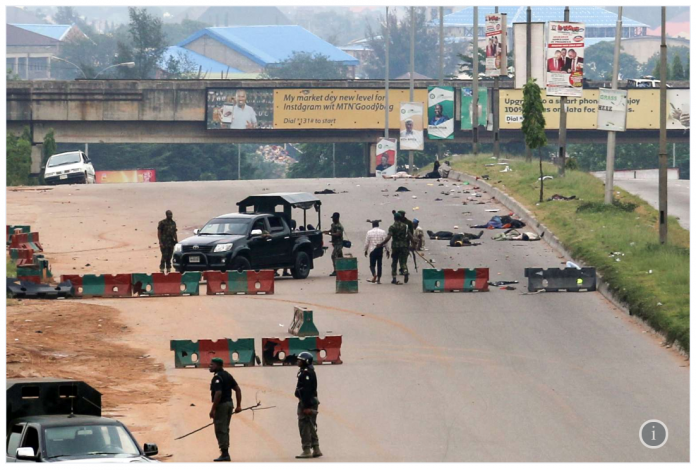 On Monday, 29th October, 2018 the security forces massacred at least 39 people at the army road block on the road from Nyanya to Abuja.  A peaceful, unarmed demonstration of Shi’ite supporters of the Islamic Movement in Nigeria (IMN) were gunned down on the road from the popular residential areas of Nyanya, Maraba and Karu to the centre of Abuja.

The IMN say that over a thousand of their members are missing, the police say they are holding 400 – others may be dead, but their bodies yet to be recovered.  The army killed at least six on the previous Sunday.  The Shi’ites were demonstrating for the release of their leader Ibrahim Zakzaky who has been illegally detained with his wife since the massacre of at least 350 IMN members in December 2015 in Zaria.  The High Court ordered their release in December 2016, but this decision has been ignored by the security forces.

The massacre on the Nyanya road is the latest evidence of the inhumanity of the security forces.  They have killed as much civilians in the north east as Boko Haram.  In the south east they massacred IPOB supporters and in the Niger Delta,  they continue to harass local people.  The officers responsible for ordering this mass killing should be court martialled, but more importantly, the security forces need to be dissolved and re-constituted under popular control.

We need security forces that really protect the poor majority rather than terrorising them.  It is no accident that the largest recent killing in Abuja occurred on the road from major working-class quarters on the outskirts of the capital city.  This is the road that many workers travel to work every day.  So, it is no coincidence that this killing happened on the day before the NLC/TUC day of outrage and mourning over the minimum wage.

Sixty per cent of police officers are said to be directly protecting the rich and powerful.  The police always side with the money bags.  When we strike they try to protect the companies and not our ‘right to strike’.  At MMA2 the security forces tried to intimidate the workers, during the recent mass action of ATSSSAN, NUATE & NAAPE against bi-Courtney’s anti-labour actions.  When workers protested against the corruption of the executive secretary of the National Health Insurance Scheme, it was the police who ensured the suspended official could enter his office.

A report by Amnesty International shows the level of violence and killing aimed at the IMN:

“An investigation by Amnesty International shows that the horrific use of excessive force by soldiers and police led to the killing of at least 45 supporters of the Islamic Movement in Nigeria (IMN) over two days, as the Shi’a Muslim group held a peaceful religious procession around Abuja…”

“It seems the Nigerian military are deliberately using tactics designed to kill when dealing with IMN gatherings. Many of these shootings clearly amount to extrajudicial executions,” said Osai Ojigho, Director of Amnesty International Nigeria.

“Since a massacre of over 350 IMN supporters which took place in Zaria in 2015, the Nigerian authorities have consistently sent in the military to respond to IMN protests or marches. This strategy appears to be at least partly to blame for the bloodshed witnessed on Saturday and Monday…

We need to remember and mourn this planned massacre, but we also need to organise.  As Charly Boy says to explain why he joined the protests, “I remember one of the great quotes of my great father. ‘Son wherever you see injustice, fight it for it may boomerang and chop your head off’.

We need to come out in our tens of thousands during protests and rallies throughout the general strike slated to start on Tuesday, 6th November.  The answer to state intimidation is mass collective action.

SWL Calls for the Immediate & Unconditional Release of Sowore and Others

SWL Calls for the Immediate & Unconditional Release of Sowore and...