It was a long drawn out battle between the aviation trade unions and Bi-Courtney Aviation Services Limited at Lagos domestic airport.  The unions halted operations at the MMA2, Ikeja in early October following the unjust sacking of some workers of the company after they joined the trade union.

Bi-Courtney is well known for its anti-union activities.  The company deprives workers from exercising their rights to associate and belong to trade unions of their choice. Industrial democracy is totally non-existent.  It carried out these polices when managing the Lagos domestic airport terminal MMA2 as a Public Private Partnership.

The whole episode assumed a new dimension in May 2018 when some workers of Bi-Courtney decided to take the bold step of joining some of the relevant trade unions.  These were the Air Transport Services Senior Staff Association of Nigeria (ATSSSAN), the National Union of Air Transport Employees (NUATE) and the National Association of Aircraft Pilots and Engineers (NAAPE). The decision of the workers was as a result of the unfair working conditions existing in the company.  These problems the workers realized were too difficult for them to redress by themselves without the intervention of the trade unions.

The workers gave the following instances as some of their grievances:

The workers union, ATSSSAN, waited for almost two months to get a response from Bi-Courtney.  When this was not forthcoming a final ultimatum was issued to the company.  Notice of a strike was issued to the management.  In addition, all security agencies, concessionaires/vendors, airlines and NCAA were sent copies of the warning letter.

Many workers had the expectation of immediate picketing of the company once the trade unions’ ultimatum expired.  Some sacked workers of Bi-Courtney became somewhat disillusioned and accused the unions of compromising by selling out to management.

However, the unions remained undeterred and further explored means of social dialogue before shutting down.  This was owing to the fact that the aviation sector is a very sensitive sector and therefore, trade unions tend to be wary of any rush to disrupting activities.

The shutdown commenced at 4.30am on Wednesday 10 October 2018. The management of Bi-Courtney employed all tactics in the book to stop the peaceful protest by the unions.  This included hiring of bouncers, use of wild attack dogs, and locking out of workers with an immoveable truck trunk at the gates.  The company also claimed to employ an invincible “Jankara Injunction Order“, but this was never actually served on ATSSSAN.

On the first day, Bi-Courtney employed about twenty bouncers, invited officers and men of the Air Force Command to disorganize the protest, while the management staff all came to the gate trying hard to intimidate our members, but all to no avail.

On the second day of the protest, Bi-Courtney degenerated by first increasing the number of bouncers to over fifty and bringing in wild attack dogs.  They also barricaded the entrance and exit gates with massive containers and truck trunks.  Bi-Courtney also tried to mobilise MMA2 tenants to carry placards against the unions.  All their strategies and tactics failed as injustice can never subdue a just cause where the workers are united.

In spite of all these actions, the trade unions remained resolute and undaunted. In the end, the management of Bi-Courtney, seeing that the unions were determined to ensure justice prevailed, had no choice but to succumb.  Eventually the company gave in to the superior fire power, unity and demands of the trade unions.  Bi-Courtney was also suffering significant economic loss, so they decided to succumb.

They agreed to re-instate the unjustly sacked staff without loss of pay or service and allow unfettered unionisation of all the staff.  Now the trade union members have been recalled to work. Bi-Courtney has also agreed to the unionization of workers it employs at the Lagos MMA2 domestic terminal. 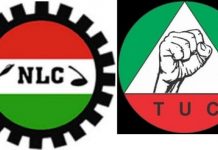 28 Sept: The General Strike That Never Was