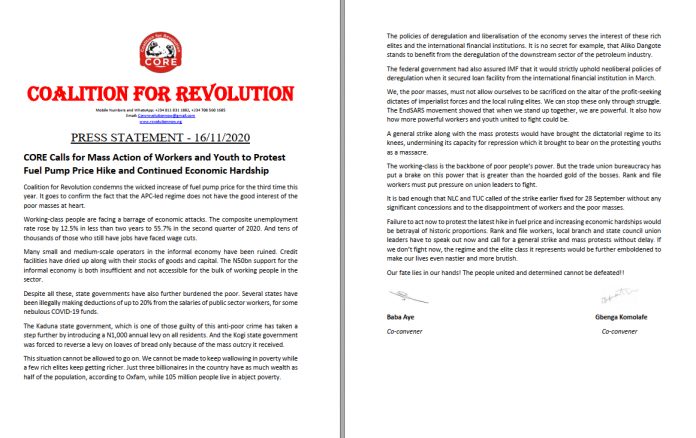 Coalition for Revolution condemns the wicked increase of fuel pump price for the third time this year. It goes to confirm the fact that the APC-led regime does not have the good interest of the poor masses at heart.

Working-class people are facing a barrage of economic attacks. The composite unemployment rate rose by 12.5% in less than two years to 55.7% in the second quarter of 2020. And tens of thousands of those who still have jobs have faced wage cuts.

Many small and medium-scale operators in the informal economy have been ruined. Credit facilities have dried up along with their stocks of goods and capital. The N50bn support for the informal economy is both insufficient and not accessible for the bulk of working people in the sector.

Despite all these, state governments have also further burdened the poor. Several states have been illegally making deductions of up to 20% from the salaries of public sector workers, for some nebulous COVID-19 funds.

The Kaduna state government, which is one of those guilty of this anti-poor crime has taken a step further by introducing a N1,000 annual levy on all residents. And the Kogi state government was forced to reverse a levy on loaves of bread only because of the mass outcry it received.

This situation cannot be allowed to go on. We cannot be made to keep wallowing in poverty while a few rich elites keep getting richer. Just three billionaires in the country have as much wealth as half of the population, according to Oxfam, while 105 million people live in abject poverty.

The policies of deregulation and liberalisation of the economy serves the interest of these rich elites and the international financial institutions. It is no secret for example, that Aliko Dangote stands to benefit from the deregulation of the downstream sector of the petroleum industry.

The federal government had also assured IMF that it would strictly uphold neoliberal policies of deregulation when it secured loan facility from the international financial institution in March.

We, the poor masses, must not allow ourselves to be sacrificed on the altar of the profit-seeking dictates of imperialist forces and the local ruling elites. We can stop these only through struggle. The EndSARS movement showed that when we stand up together, we are powerful. It also how how more powerful workers and youth united to fight could be.

A general strike along with the mass protests would have brought the dictatorial regime to its knees, undermining its capacity for repression which it brought to bear on the protesting youths as a massacre.

The working-class is the backbone of poor people’s power. But the trade union bureaucracy has put a brake on this power that is greater than the hoarded gold of the bosses. Rank and file workers must put pressure on union leaders to fight.

It is bad enough that NLC and TUC called of the strike earlier fixed for 28 September without any significant concessions and to the disappointment of workers and the poor masses.

Failure to act now to protest the latest hike in fuel price and increasing economic hardships would be betrayal of historic proportions. Rank and file workers, local branch and state council union leaders have to speak out now and call for a general strike and mass protests without delay. If we don’t fight now, the regime and the elite class it represents would be further emboldened to make our lives even nastier and more brutish.

Our fate lies in our hands! The people united and determined cannot be defeated!!

The Nigerian Youth and Political Power

The Nigerian Youth and Political Power

September 26, 2022
The fourth republic has failed. Over the past 23 years, the working people in Nigeria have witnessed drastic decreases in their incomes. A disgraceful...