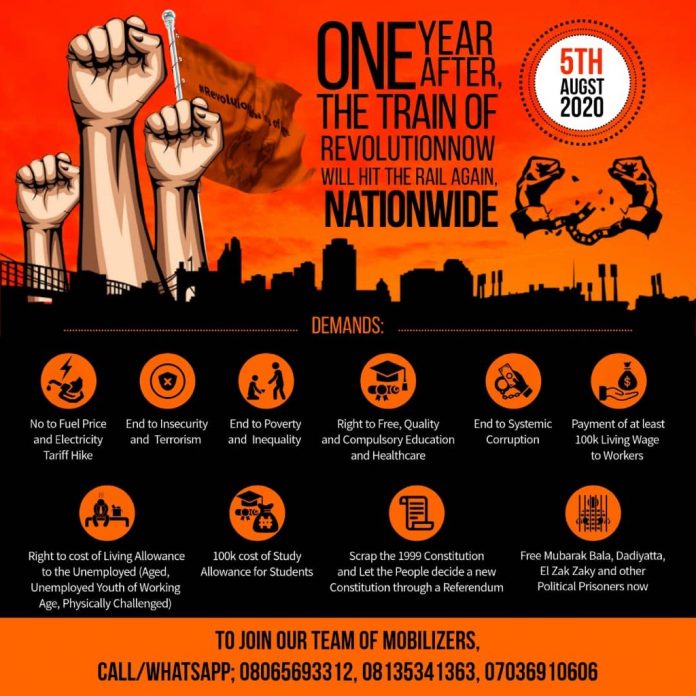 On August 5, 2019, the Coalition for Revolution (CORE) launched a nation-wide campaign against massive corruption, rising unemployment and worsening misery of the poor masses and demanded greater accountability in the management of public resources in order to engender balanced and socially just development. Our campaign, because its demands are for system change and the people’s liberation, is for #RevolutionNow!

The federal government responded by unleashing unprecedented repression, incarceration of some leaders of the movement, and brutalization of not less than 50 CORE activists all over the country during the protests. This was with the mistaken believe that such jackboot tactics would silence the yearnings and aspiration of the people for equitable development, social justice and improved standards of living.

Since then, the situation in the country for most working people keeps getting worse. While poverty continues to increase for the many, the rate of stealing of monies that could be used to improve lives and livelihoods keeps accelerating, on a daily basis. Repression follows in tow, to stop questions being asked.

The gross mismanagement of the Covid -19 Pandemic has further aggravated the masses suffering to historic proportions as inhuman lockdowns were imposed resulting in massive retrenchment of workers, terrible hunger and death for people working in the informal sector while at the same time prices of the most basic utilities including electricity and fuel have been whimsically increased.

Meanwhile unprecedented looting of the national treasury continues unabated as exemplified in the pilfering of 81 billion naira at the NDDC by a few officials even during the difficult and trying period of the lockdown!

To mark the one year of the #RevolutionNow Movement and relaunch the campaign for an end to unabating looting of public resources and revamping of the social and economic fabric of our country, the Coalition for Revolution (CORE) will stage a massive demonstration of the collective anger and deprivation of Nigerian people on August 5, 2020. Other details include:

Onward forward to the masses’ liberation!

NO TO FUEL PRICE HIKE! BUHARI MUST GO!!

NO TO FUEL PRICE HIKE! BUHARI MUST GO!!

September 15, 2020
NO TO ELECTRICITY TARIFF INCREASE! STOP ANTI-POOR POLICIES!! CHANGE THE SYSTEM – FIGHT FOR REVOLUTION NOW!!!! The ruling class of thieves, exploiters and oppressors have...