On Thursday, the federal government sent the 2020 Appropriation Act (Amendment) Bill to the National Assembly, which was hurriedly passed for second reading at both Senate and House of Representatives the same day. In the revised budget proposal, it can be seen that the federal government has cut the allocations in the previously bill sent before the outbreak of COVID-19 in Nigeria and the global slump of crude oil price.

But again, Major General Mohammed Buhari and cohorts expressed disingenuousness and insensitivity in the manner the national budget’s revision was done. It was gathered that the allocation to the Basic Health Care Provision fund which was meant to cater for the primary health centres was cut by 42.57% that is from N44.4 billion to N25.5 billion. Similarly, a whopping sum of #60.6 billion was cut from the initial #111.7 billion allocation to Universal Basic Education.

It is rather unfortunate for the Federal Government to still introduce renovation of National Assembly fund in the proposed revised budget despite the popular criticism that followed such plan last year. And it is rather insulting to Nigerians that the allocation to the renovation of a complex was revised by merely 25%, that is from N37 billion to N27.7 billion, while cuts to funding of social services were more severe.

It is noteworthy to mention that on 27 March the House of Representatives took delivery of 400 exotic vehicles ordered from abroad, that happened in the period COVID-19 was already causing havoc across the country. This attempt by the Buhari led government shows that the Nigerian bosses’ state has not learned from the current reality we are living through. The COVID-19 crisis exposed the need to increase funding for public health particularly and public services generally. Some countries across the world are drawing this important lesson, for instance in Spain the government nationalized hospitals for public use.

Nigeria before COVID-19 lagged behind on funding of public health. The country has one of the highest rates of maternal mortality in the world. Yet the Coronavirus pandemic has exacerbated the subsisting health issues such as maternal mortality, malaria, cholera etc.

Already the Nigerian health sector has N3 trillion annual infrastructural deficit. This implies that the N27.7 billion allocated to a NASS complex which is in a strong condition is more needed in the health and education sectors which are in ailing conditions. We thus call on the NLC, TUC and ULC to declare a national strike to demand for immediate withdrawal of the allocation to the renovation of National Assembly complex.

We also urge rank and file workers and youth to join the campaigns for increased funding of public health and an immediate stop to the National Assembly renovation. We should utilize all the resources available to mobilise the Nigerian masses for this important campaign.

It is obvious that the Nigeria bosses do not care about us. Even in the period of crisis which has shown that the status quo is catastrophic, the priority of the government is to protect their own interest at the detriment of the people’s need. It is thus important that we organise to change the system and kickout the bosses that benefit from it.

COVID-19; Africa and the Storm of a General Crisis 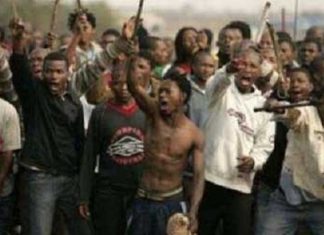 July 4, 2020
The health sector in Kogi state was shutdown on Wednesday 1 July, as seven unions in the sector commenced indefinite strike. This was an...

COVID-19; Africa and the Storm of a General Crisis