The Trade Union Congress has called on all state governments “who have not complied with the implementation and immediate payment of the N30,000 new National Minimum wage to commence negotiations and implementation on or before 31st January”. This was at its National Executive Council meeting on 9 January. The NEC-in-session also resolved to “participate in a global rally against war, slated for January 25”.

Speaking at a press conference after the meeting, the TUC President, Comrade Quadri Olaleye informed that only six out of the thirty six states have signed to commence implementation of the minimum wage and consequential adjustments. He further disclosed that fifteen states have commenced negotiations on the revised wages. This means that almost half of the states are yet to take the necessary steps towards ensuring implementation.

To avoid any ambiguity on the intent of TUC, Comrade Olaleye stressed that “either you are in the process (of negotiations) or you have not commenced, the deadline is for everybody”. There is absolutely no justifiable basis for any state government to continue delaying the implementation of what is in fact a meagre minimum wage and barely adequate consequential adjustments. The full arrears must also be paid, with effect from April, when the new National Minimum Wage Act was passed into law.

While the bosses try to dodge payment of the miserly wage “increment” with their left hand, they have already started taking and taking from the lean pockets of workers with their right(-wing) hand. The Value Added Tax, which places a higher tax burden on poor working-class people than the rich few has been increased by 50%. And On 4 January, the Nigerian Electricity Regulatory Commission “announced the immediate review of electricity tariffs in the country from January 1”. The tariff hike ranges from 59.7% to 77.6% in different parts of the country.

The struggle for implementation of the new national minimum wage and consequential wages review must be part of a broader resistance to the continued impoverishment of poor working-class people. The trade unions and popular organisations need to wage systematic struggle against the anti-poor people economic and political regime of the bosses. And this has to start now.

A failure to do so would further give confidence to the Major General Muhammadu Buhari-led regime to pursue even more drastic means of making the working masses bear the burden of the failure of capitalism.

Perpetual wars and the climate crises are clear examples of the generalised crisis and failure of the profit-driven system which capitalism is. What matters to the bosses who manifest this system is not the fulfilment of human needs or safeguarding our planet, the only home we have.

Ever in competition with themselves, they exploit the earth without consideration of the negative impact of putting profit before the people and planet earth. The wildfires we have seen destroying vast tracts of lands in Australia and consuming the lives of up to a billion animals is one of the tragic consequences of the capitalist mode of production.

Ever in competition to gain more access to natural resources, the capitalists wage otherwise senseless wars, committing trillions of dollars that they will never make available to improve the lives of the poor masses to mass production of weapons of destruction.

A conservative estimate, for example, puts the financial cost of the United States war on terror at not less than $6.4 trillion, since 2001. This is more than double the amount required to have ended extreme poverty worldwide in the same period, according to Jeffrey Sachs, a leading capitalist economist and public policy analyst. And, apart from the financial costs, “over 801,000 people have died due to direct war violence and several times as many indirectly”.

Therefore, as working-class people and activist youths, taking a clear stance against the bosses’ wars is of utmost importance. It is thus quite significant that the TUC NEC resolved to join the global protest against war on 25 January. SWL is an endorsing organisation of the global day of action which has been called by the Act Now to Stop War & End Racism (ANSWER) Coalition.

We welcome TUC’s resolve to join this mass action and urge other national trade union centres and trade unions to march as one against the United States waging an imperialist war as well as against the state of insecurity we face across the country. It is the poor working masses that have borne the brunt of insecurity in Nigeria. It is we, working-class people across the world, that will bear the burden of a United States war on Iran, with its global repercussions.

Being just five days from the expiration of the ultimatum issued by the TUC, the global day of action equally presents an opportunity for mass mobilisation to demonstrate the strength and readiness of working-class people to defend our interests. Our placards and demands must include the call for full implementation of the new national minimum wage, including all consequent arrears along with the upward wage review.

The TUC, NLC, ULC and Joint National Public Service Negotiating Council (JNPSN) have to come together now, with the radical civil society movement, as a revitalised Labour Civil Society Coalition (LASCO), to organise and fight. The unions’ failure to ensure full implementation of the last minimum wage review, through well organised struggle across all states emboldened the bosses to go further by owing backlogs of salaries, for upwards of years in some instances.

This kind of situation must not be allowed to repeat itself. The different states councils of NLC and TUC must not be left to their own devices as they were before. It is easier for the bosses to defeat us in such scattered battles across one state after the other. We must fight on a national basis until each state fully implements the revised wages. And we must not stop at that. We must demand the full payment of all outstanding salaries and pensions of workers since 2011, and wholeheartedly resist all anti-poor people policies of the regime.

The working-class and trade unions must dare to struggle and thus dare to win! 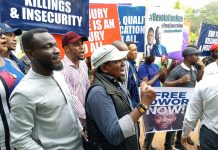 January 10, 2020
The Trade Union Congress has called on all state governments “who have not complied with the implementation and immediate payment of the N30,000 new...