Xenophobia and racism have grown over the last decade of a global economic crisis. Right-wing politicians and interests have tapped into the frustration and anger of millions of people who have been thrown into the abyss of hopelessness and frustration.

They are the rich local capitalists and their foreign imperialist partners.

They jointly run the big corporations, which make billions of Rands every year exploiting both local and foreign workers, while millions of poor people lack access to quality healthcare, education, land, decent housing and jobs or living wages when they have one.

Their conglomerates, in the mineral-energy complex, telecommunications and retail services (several of which are listed on the London Stock Exchange, for example) export profits to advanced capitalist countries, instead of reinvesting these in employment for the South African working-class.

Meanwhile, these same corporations have contributed significantly to the collapse of small-scale industry, particularly in the informal economy and the rural economy, in neighbouring countries to South Africa, with the might of large-scale production. This has become a major push factor for emigration of working-class people from these countries, where they join poor South African workers in townships and shanties, trying their best to eke a living.

In daily life a South-African poor person has much more in common with a poor person from another country than with the rich living in luxury mansions in Sandton.

It equally drew attention to the fact that “more than 200 people – mostly foreign truck drivers – have been killed in South Africa since March 2018”, as at the time, and as well showed that “the government has done little to address the attacks despite issuing a National Action Plan to combat xenophobia on March 25.”

Government officials have actively helped to water the seed of xenophobia over the years. It is also quite disheartening that even within the midst of this avoidable fratricidal violence, the South African Commissioner to Ghana, Lulu Xingwana, reduced the problem to a need for all capitalist governments on the continent to create jobs in their countries so that “we don’t all flock to one country”.

But even this merely begs the issue. At the heart of the current dynamics of migration within and across continents, as well as the lack of jobs (with more and more of available jobs being precarious) is the crisis of capitalist development. With particular reference to Africa, it reflects the failure of the post-colonial African nationalist capitalist class from Nasser, Nkrumah and Mandela to Mugabe, to break the bondages of neo-colonialism and capitalism. This class fears the revolting workers and peasants more than imperialism with whom it eventually compromises on a class basis as a junior partner.

Attempts to misrepresent the root cause of the problem, which is the nature of capitalist “development”, is not limited to xenophobia or anti-foreigners’ politics. In various countries on the continent, different sections of the class of rich people have tried to divert attention from the failure of the system they represent by politicising ethnic differences. In Burkina Faso, Ghana and Nigeria, for example, the Fulani have been demonised as harbingers of insecurity.

Organised labour across the continent must bring its weight to bear in providing leadership for massive mobilisation against xenophobia and all forms of chauvinism. This must be tied to the struggle for decent jobs, land, social protection and quality social services for all.

Workers of all lands unite and fight! We have nothing to lose but our chains, and a world to gain! 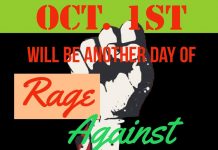 Lagos Passes VAT and Anti-Grazing Acts: What does it means for working-class people?

September 15, 2021
The Nigerian state will once again roll out the drums to commemorate Nigeria’s flag independence, on 1 October. However, the poor masses have no...

Lagos Passes VAT and Anti-Grazing Acts: What does it means for...