Socialist Workers and Youth League (SWL) condemns the xenophobic attacks in South Africa, as well as reprisal actions being whipped up in Nigeria. Chauvinism of all sorts, including racism, ethnicism (“tribalism”) and nationalism divide working-class people. But what we need is for working-class people of all lands to unite and fight against the bosses who are themselves united in exploiting us.

It is not enough for us to see and be enraged by the fact that poor South Africans are beating up and even killing migrants in South Africa, most of whom are just trying to eke a living and send some money home to help their families. We should ask ourselves why this is so and take steps to stop this cycle of anti-foreigners’ violence and the ideas which ignite them.

What is at the root of this cycle of xenophobia in South Africa?

At the heart of the xenophobic attacks in South Africa and reprisal attacks in Nigeria is the systemic failure of capitalism. The failure of capitalism to improve the lives of poor South Africans is self-evident. Unemployment rates in the country have remained exceedingly high for a generation. The overall unemployment rate is at an all-time high of 38% with not less than 16 million people being jobless.

Most of these are poor black people, living in slums and shacks on the peripheries of cities and townships. Meanwhile the former president, Jacob Zuma who was removed on corruption charges spent $28 million from public funds that could have been used to provide better health facilities and schools to upgrades his private massion. And the current president, Cyril Ramophosa, who rose into prominence as a trade unionist during the anti-apartheid struggle, is now a multi-billionaire with shares in many establishments including Lonmin mines, which saw to 34 miners on strike being killed at Marikana five years ago.

There is clearly a large socioeconomic gap between a handful of rich people and an vast population of poor people in this most industrialized country on the African continent. Indeed, it has been established that South Africa has the highest level of inequality in the world.  With the formal end of apartheid, a few black people (most of whom are part of, or very close to the ruling ANC party) have joined the ranks of a racialized capitalist system. From being a national liberation movement, the ANC became a party of the bosses, perpetuating the essence of what millions of working-class people and youth fought against for over a century i.e. exploitation and oppression.

Not surprisingly, ANC leaders have helped stir up anti-foreigner sentiments as a way of diverting attention away from the systemic failure of the capitalist system which they represent. This is packaged as rabid nationalist perspectives meant to scapegoat migrants, instead of holding the capitalist ANC stalwarts to account.

Lawrence Ntuli, a member of Keep Left, the sister organisation of SWL in South Africa revealed how key members of the ANC leadership helped pave the way to xenophobic attacks in 2015.

At that time, as he noted, the South African water and sanitation minister Nomvula Mokonyane wrote on her Facebook wall “Almost every second outlet (spaza) or even former general dealer shops are run by people of Somali or Pakistan origin in a yard that we know who the original owners were…”.

Similarly, the minister of Small Business Development, Lindiwe Zulu said “Foreigners need to understand that they are here as a courtesy and our priority is to the people of this country first and foremost. They cannot barricade themselves in and not share their practices with local business owners”.

And more recently, Mr Aaron Motsoaledi who is now the Minister of Home Affairs declared that foreigners who were scrounging off the country’s health system were the reason why government had not been able to provide quality health services to South Africans! He was the Minister of Health when he made this statement at a summit organized by the National Educational Health and Allied Workers Union (NEHAWU) in November 2018.

Unfortunately, even labour leaders, some of whom had been traditionally aligned with the ANC as well, have not helped matters with rousing nationalist sentiments, that tend to serve as recipe for the sort of xenophobic attacks we are once again witnessing. An example of this was the series of tweets by Zwelinzima Vavi, General Secretary of the South African Trade Unions Federation (SATUF) earlier in the year.

There he argued that “Every shop owner is foreign and selling foreign goods — part of the mass dumping from mainly East”. This was after hinting that such foreign shop owners’ economic activities undermined jobs and the growth of local manufacturing capacity.

It must be stated however that this is not in any way to cast Vavi, who has a long history as a socialist and trade unionist or SAFTU as being xenophobic. On the contrary, in a fine demonstration of working-class internationalism, SAFTU was one of the first organisations to speak out against the current attacks.

Rather, it is to draw out the possible slide into dangerous waters of chauvinism that socialists could get into when they perceive economic “development” (industrialization, etc.) as the primary pathway to socialism instead or national democratic revolutions as a prerequisite stage to socialist revolution. As revolutionary socialists, we must consistently stand on the rock of internationalism and shun the banana peel of nationalism. We must never lose sight of the fact that the problem is not one of under-productivity, it is one of the need to build the conscious struggle of the working-class as an international movement, for its self-emancipation.

Is the situation in Nigeria any better?

Essentially, the situation is not very different in Nigeria. The unemployment rate rose from 18.1% to 23.1% in 2018. And most of those employed hardly earn a living wage. In fact, many public sector workers across more than half of the states in the federation are owed backlogs of salaries, for upwards of over a year in some cases. This state of affairs has left millions of disillusioned and angry poor people in its trail.

Crime has been on the rise, with kidnappings, armed robberies, burglaries and so-called money ritual practices becoming daily occurrences. But instead of owning up to the fact that the capitalist system which they represent is at the heart of the problem, different sections of the class of rich people present “other people” as the problem.

Xenophobia takes the form of “tribalism”. The poor Fulani herder becomes “the other” for many people – the equivalent of the “foreigners” to those from the ranks of the wretched of the earth on rampage in South Africa.

But while the poor get poorer, with Nigeria now being the poverty capital of the world, the rich are getting disgustingly richer! Yet, the Buhari-led federal government has not commenced implementation of the New Minimum Wage months after signing it into law, despite the fact that the N30,000 signed is a starvation wage! Yet the politicians get robust salaries and allowances. “Our” senators for example plan to spend N5.5 billion on cars that will be valid for just 4 years.

The secret of the accumulation of wealth by a few rich people lies in the poverty of the immense majority of the population. But they will not tell us so. The different sections of rich people will claim that we are one, because we have ethnic or religious affinity!

What is to be done?

The backdrop of rising xenophobic sentiments across the world is the generalized global crisis of capitalism. Over the last dozen years, the worst world economic crisis in almost a century has turned the lives of billions of poor people all over the world upside down. Millions are migrating to find a better life anywhere they can.

Often this has been at the cost of their lives for tens of thousands on the Mediterranean Sea and in the Sahara Desert every year. And when they reach the countries of origin, politicians like Donald Trump and Aaron Motsoaledi are quick to try make them scapegoats, mobilizing chauvinistic sentiments under different names. The crimes of a few migrants become ready excuses for labelling all migrants as criminals, drug addicts etc. Indeed, being an undocumented migrant itself becomes a crime!

Now more than ever, working-class activists and youth must mobilise against all forms of chauvinism, including nationalism and ethnicism. We must do everything we can to build working-class people’s unity, pointing out clearly who the enemies of poor people are i.e. the rich!

The secret of the poverty of working-class people in South Africa and Nigeria must be made clear and continually emphasized by the trade unions and radical civil society organisations, including socialist groups. Like SAFTU in South Africa, we must all “continue to campaign for a radical rupture” with neoliberalism, and indeed capitalism as a whole, because neoliberalism is merely a sharp picture of this evil system whose default nature is impoverishment of the poor masses and promotion of devious ways to turn us against each other.

Poor working-class people in South Africa have much more in common with poor people that happen to be Nigerians, Zimbabweans, Zambians, Kenyans etc. than they have with billionaires like Cyril Ramaphosa, and his likes. Not only must we strive to build the unity of the poor masses across borders and lines of nationalities, our primary appeal cannot be to the governments of these rich people who, along with the system they represent, are behind this fratricidal crisis.

The NLC, TUC and trade unions in Nigeria and South Africa, as well as across the continent, must come out together to take a united stand against these xenophobic attacks. As we pointed out earlier during the xenophobic attacks on Nigerians in Ghana:

“Thus, it is not the bosses’ class and their diplomacy that can bring an end to xenophobia. It is the working-class that must provide leadership to stop this ill wind that blows no good to the poor masses, in any country.”

This was in a joint statement of the SWL with the Socialist Forum of Ghana barely two months ago. Just as the NLC has longstanding bilateral relations with the TUC Ghana, it also has same with COSATU in South Africa. In fact, there is a trilateral relationship between COSATU, TUC Ghana, and the Nigeria Labour Congress. It is at times like this and not just in conferences that the worth of such relations between trade union centres can be shown to have any meaning to working-class people.

To start with, a continental day of mass action against xenophobia led by the African trade union movement, will send home a message far deeper than any intervention of the knock-kneed governments of the rich in the different African countries can do, to the poor working masses that we are one. 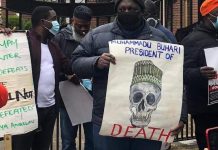