One of the criminal hallmarks of capitalism is its insatiable lust for expropriating everything possible – the wealth our labour creates, natural resources, the national treasury, etc – without bound. Capitalists see themselves as the only ones having the absolute right to life and good living conditions. To them, others are mere tools for accumulating capitalist.

It has become the norm in Nigeria for some callous organisations to wilfully ban trade unions and their activities, in utter disregard for the labour law. This is simply because they prefer to curtail the possibility of workers’ collective action against the extremely hostile terms and conditions of work they are saddled with.

It is their practice to subject workers to sub-human working conditions with monthly pittance that cannot even take them to the workplace for a week. Any minimal attempt to appeal for improvements in their conditions of service always attracts dismissal without pay or “Services No Longer Required” with unjust “one month pay”, irrespective of the number of years or decades the worker might have put into the service.

It is the realisation of the oppressive tendencies of their employers and their individual constraints that led some of the more class conscious workers of the Bi-courtney Aviation Services Limited (BASL), operators of the Murtala Muhammed Airport 2 (MMA) Lagos, to declare their interests for membership of the Air Transport Services Senior Staff Association of Nigeria (ATSSSAN) and National Union of Air Transport Employees (NUATE).

However, in May this year, this declaration of interest by workers was immediately greeted with letters of dismissal to over sixty (60) members of the workforce. This repressive step dampened the morale of many other workers interested in joining the union.

Various efforts to making BASL respect the constitutional right of these workers to belong to the union, including the intervention of the Nigerian Civil Aviation Authority (NCAA) continue to prove abortive.

Because of the confidence the workers reposed in the Unions, which made them take the step of joining the Unions in the first instance, aviation Unions issued a final 14-Day ultimatum to the management of Bi-courtney Aviation Services Limited (BASL) to recall and reinstate, with immediate effect, the victimised aviation workers on Monday 20th of August 2018.

It is now a challenge to all lovers of genuine freedom to heed the clarion call to occupy the premises of MMA2, Ikeja Lagos when the bell is finally rung. The time has come to liberate the workers of BASL in the spirit of the extant Nigerian labour laws; ILO conventions and section 40 of the Constitution of the Federal Republic of Nigeria, all of which guarantee the inalienable right of workers to associate and/or belong to unions of their choices.

Every onlooker in the face of oppression, is either a coward or a traitor! 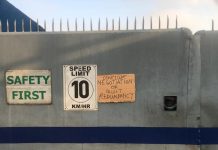 Another day for African tyrants as Museveni the Dictator is sworn...

May 12, 2021
Today, May 12, marks another sad day in the chapter of African history. But for the African tyrants, today is another day of victory....