Federal healthcare facilities across the country were shut down from the first half of April when the Joint Health Sector Unions (JOHESU) commenced an indefinite strike. By the beginning of May, the strike became generalised with workers at the secondary and primary tiers of the national health system joining the industrial action.

Over this period, there has been recrimination between the Nigeria Medical Association (NMA) and JOHESU, which is being accused of seeking pay parity with medical and dental practitioners. While salary increment is a key demand of JOHESU, a broader perspective of the situation at hand is required by working-class activists, as we seek to forge the greatest unity possible of workers in the sector.

It is noteworthy that some of the demands of JOHESU are longstanding. These include the call for the federal government to implement the skipping of health salary scale (CONHESS) 10, in a similar manner to the skipping of Grade Level 11 in the core civil service and appointment of other health professionals as consultants in their fields.

The National Industrial Court ruled in favour of JOHESU on these two matters five years ago. But the successive PDP and APC governments have gotten away with not implementing these by stoking up rivalries between JOHESU and the doctors and reducing the issues at hand solely to one of remuneration.

JOHESU which is a essentially a united front of all professionals and other workers in the health sector apart from the doctors and dentists has been seen as being ill-motivated by the NMA. As working-class activists, our stand is always is for the unity of all workers. But we realise that this cannot be mechanically achieved.

The situation is further complicated by the contradictory class location of several health professionals, with doctors for example occupying a professional middle-class role in relation to the other health workers, and which it defends. This reality is not limited to the doctors. Pharmacists occupy the same position in relation to pharmaceutical technologists and radiologists to x-ray technicians for example as well.

Seeds of professional chauvinism are sown from the medical and health educational institutions, for some cadres to see themselves as superior to others. So a long-term solution to the perennial rivalries in the sector must include conscious political work from that draws students of the different professions close together towards a people’s health agenda-focused activism.

In the immediate instance we will call on the medical doctors to shelve their threat of also embarking on strike if there is an upward adjustment of the salary structure of the other health workers organised on the platform of JOHESU. This will only perpetuate a spiral of strikes for the wrong reasons.

We urge JOHESU and NMA not to see themselves as enemies despite the hardened lines of divide. The sky is wide enough for all birds to fly. There will always be some level of friction in relations, especially when the focus of their agitations is or appears to be remuneration, legitimate enough as that is.

But programmatic unity can be achieved through concerted efforts to realise the right to health in Nigeria. Both JOHESU and NMA have a duty to provide leadership for the working-class’ struggle for every child, woman and man to have access to qualitative public healthcare.

Addressing the chronic underfunding of public health, lack of democratic involvement of all cadres in decision-making and a non-mobilisation of community participation are key issues that should concern all cadres in the health sector. Our health is not for sale! 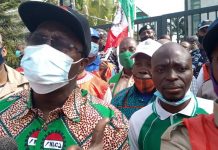