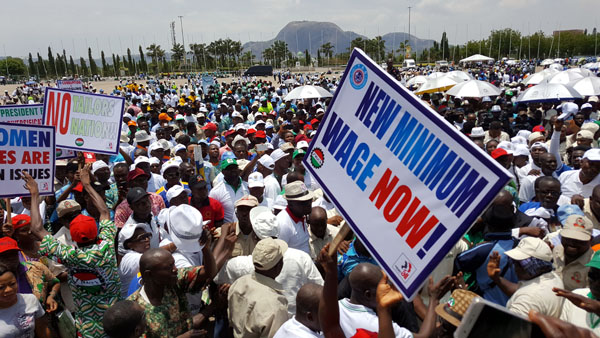 In a Communique released after the meeting, which was signed by the Chairperson, Comrade Benjamin Anthony and the Secretary, Comrade Sikiru Waheed, the union frowned at the slow pace of action by government on a new minimum wage and called for concrete action to be taken. The Council further demanded the harmonization of salary structures in the public service.

The SGC-in-session, which was the first being held since the last May Day commemoration deliberated on the rank and file workers’ protest during the May Day parade at the Eagle Square, Abuja. This was an indication that workers have lost faith in the entire leadership of the labour movement in Nigeria. The SGC was also displeased over the apology rendered by labour leaders to the Minister of Labour in respect of what transpired.

The Union equally frowned at the operations of the National Housing Fund which has little or no impact on workers that are contributing to the scheme and called for just and efficient disbursement of loans to beneficiaries. The, government, it stated, should also ensure that the Federal Integrated Staff Housing (FISH) Scheme is achieved through public construction of houses and not by private developers driven by the profit motive, which furthers the exploitation of workers.

Furthermore, AUPCTRE FCT Council observed that, workers are subjected to untold hardship in the process of obtaining Tax Clearance Certificate from the Federal Inland Revenue Services (FIRS) due mainly to employers failing to remit the full amount of PAYE tax deducted from wages at source by government.

The recent Supreme Court Judgment on the Abia State Governorship tussle held that an employee whose tax is deducted at source cannot be held accountable for any underpayment of tax. The SGC therefore, calls on government to call the FIRS to order and mandate it to issue tax clearance to workers whose taxes are deducted at source on monthly basis, forthwith.

Members expressed their delight over the foresight of the council in applying for a piece of land in FCT for erecting an office complex and a guest house. This would help consolidate the Council’s material sustainability.

The Council-in-session however noted that a class-conscious membership is the most important base on which a transformative trade union could be built. It thus commended the State Executive Council over the renewed series of education and training activities being conducted for workplace representatives, including with the Socialist Workers League. In the same vein, it directed the SEC to encourage the few Branches that have not been part of this ideological rearmament process to join the train of consciousness raising.

After the Council-in-session exhausted its deliberations, the FCT Council Secretary, Comrade Sikiru Waheed gave the closing remarks and vote of thanks where he expressed appreciation to Council members for their in-depth discussions and challenges thrown to the leadership of the Union. According to him, these criticisms will spur the leadership to work more for the union and make AUPCTRE stand tall in its consistent defence of the working-class.