In Cameroon, as in the south east of Nigeria, government troops have killed protestors agitating for independence for their region.

Soldiers shot dead at least eight people and wounded others in Cameroon’s restless English-speaking regions on Sunday, 1st October – on the anniversary of anglophone Cameroon’s independence from Britain. This happened during protests by activists calling for its independence from the majority francophone nation, an official and witnesses said. There were strikes and demonstrations last year over similar issues.

Cameroon’s divide has its roots in the end of the first world war, when the League of Nations divided the former German colony of Kamerun between the allied French and British victors.

Before the protests, authorities had banned all gatherings of more than four people, ordered bus stations, restaurants, cafes and shops to shut and forbade movement between different parts of the English-speaking regions. The government also ordered Cameroon’s border with Nigeria to be closed for the weekend.

“The military, which is supposed to protect lives and property, has turned into our greatest nightmare,” said one Buea resident, who asked not to be identified out of fear of reprisal.

The poor working people of Cameroon and Nigeria are desperate for an alternative to the current regimes which provide them with little or no assistance.  But demands for independence, as with the vote in the Catalan Region of Spain, on the same day, are unlikely to provide real answers.

It is not the ethnic group of our leaders or the language they speak that is the problem.  It is the fact that they and their state machine is run in the interests of the tiny rich majority.

In the Cameroon, the protests, which began late last year, may have a progressive aspect, as they have become a lightning rod for opposition to President Paul Biya’s 35-year mis-rule.

But in Port Harcourt protests by IPOB took on a reactionary flavour earlier this year.  In January, members of the Indigenous People of Biafra (IPOB) converged in Port Harcourt to show support for Donald Trump’s presidential inauguration. How do they think that the racist and sexist leader of the US had any interest in the poor working people of the Niger Delta?

Regional elites may mobilise the working masses to support calls for regional autonomy or independence. But they are making fake promises for improvements in the lives of ordinary people.  Look what happened, for example, in Eritrea and South Sudan after they gained independence. The lives of the majority have, if anything, gotten worse with the change in their elite rulers.

As the vote for Buhari showed, the working masses want change. But only a change away from capitalism, where society is run in the interests of the tiny elite of rich people, will provide any real hope. 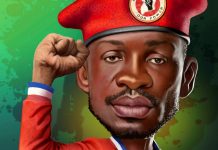 SWL Condemns Violent Attack on Students and Demand Justice for the...