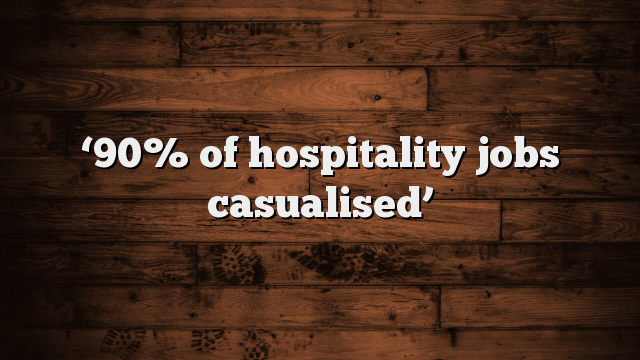 The National Union of Hotel and Personal Services Employees (NUHPSE) recently cried out that 9 out of every 10 employees in hotels are casual workers. This was during a visit by the NLC leadership to the union in the last week of May. The challenge is to stop agonizing and start organizing.

Leke Success, the union’s General Secretary was of the view that the downturn in the economy which has led to job losses is being used as an excuse by employers to prevent unions from organizing. “Employers are becoming more aggressive due to the economic challenges”, he said.

But, even in the best of times, it was no secret that most hotels prefer to keep unions out of hotels. The case is even worse in other areas of the hospitality industry. While owners of gardens, beer parlours and other relaxation spots across the country smile home daily with loads of monies, most of the workers in these establishments receive far less than the paltry minimum wage. In some cases, the monthly wages of bartenders and others is as small as just N10,000.

NUPHSE has written to the ministry of labour, complaining about this worrisome situation. But that is not enough. “Freedom comes by struggle”, as a popular aluta song goes. What is needed is a fightback by the union, with NLC, other affiliates and radical activists joining. Such a struggle should reach out to working-class people in the communities where these hotels, eateries and other relaxation centres are located.

The union should draw inspiration from, and become part of the global #FightFor15. This campaign of workers from below commenced in the United States five years ago. 200 fast-food workers went on strike demanding a minimum wage of $15 per hour and trade union rights. Today, it has become a mass movement across the world with action being taken by poor, underpaid workers denied the right to be members of unions in more than 300 cities across six continents.

In the USA alone, 22 million workers have won increases in wages and the right to be union members through this struggle. And from the hospitality industry where it started with fast-food workers, the campaign now expanded to include airport workers, child care teachers, home health aides and retail employees – workers in a number of sectors of the economy who are underpaid.

But, the campaign did not just start, it was because unions like the Services Employees International Union (SEIU) seized the bull by the horns to take action. NUPHSE and the NLC have to take action and initiate an expansive struggle. This would entail picketing of hotels, fast-food joints, gardens etc. We should draw in members of the communities including from amongst those who pay for the services rendered by these establishments into the struggle.

In many cities, based on conscientisation by the unions, consumers (particularly those who are themselves working-class people) have stood by the workers, joining them to demand improvement in wages and the right to organize from the employers. It has opened a new phase of practical demonstration of solidarity.

To win our emancipation from the bosses, we must build our collective strength, in beating back the attacks of employers on our livelihoods. These would help to sharpen the clarity of working-class people that we are many and the bosses are few. And if we are united and determined, we can defeat the parasitic capitalists. A key lesson to be learnt from the #FightFor15 and workers’ struggles for reforms in general is the need to stop agonizing and start organizing.

As socialists, we will continue to argue for this necessary step – to fightback. Struggle is the greatest teacher of working-class people. The employers will however always seek ways and manners to rollback victories we win. We must thus not stop at winning better wages and working conditions. It is also not enough for us to win the right to organize as unions. We must fight to end the exploitative system of capitalism and build society anew, based on solidarity and working-class democracy, where we who create the social wealth democratically run our enterprises and the society as a whole.

November 27, 2022
If life is the point, then for every human alive, our original sin is opting to continue to benefit from a system rigged to...