The revelations by Mr. Abdulmumin Jubrin, who was until recently Chairman of the House of Representatives Committee on Appropriation goes to confirm the fact which working class people know – the “representatives” don’t represent us. They represent themselves and their class of exploiters.

In specific terms, it has unveiled the fact that legislators “padded” the budget. According to Mr. Jubrin, the Speaker, Mr Yakubu Dogara tried to include N30bn into the 2016 budget. He also informed that Dogara diverted a federal government water project to his farm in Nasarawa state.

It is a good thing that Abdulmumin Jubrin who now calls the Speaker “a shameless fraud” has helped confirm poor people’s fears. But this does not absolve him of equally being a thief, as far as we are concerned. For him to claim that he was inspired to rat on the Speaker after saying his prayers is an affront on the intelligence of Nigerians.

Another member of the dishounorable house, Mr Lawal Gurmau has even pointed out that “padding” has been a tradition in the house for some time. Mr Dogara’s claim that “members (of the House) took serious exceptions to his despicable antics and sundry acts of blackmail and protested to the Leadership to prevail on Hon Abdulmumin to expunge from the Budget what he claimed he allocated to them since they did not solicit for those projects” rings hollow. We sre no fools!

Nigerian legislators rank amongst the highest paid anywhere in the world. And this is for doing next to nothing, compared to the labour of working people who create the social wealth. But this is still not enough for them. They corruptly enrich themselves at our expense.

Monies that could have been used to build hospitals, schools and provide better lives for millions of Nigerians are regularly stolen by them. We must put an end to this. The National Assembly is a reflection of the shamelessness of the bosses. They would do anything they can to enrich themselves.

This is the time to mobilise against these vagabonds in power. Yakubu Dogara and all principal officers of the House must be forced to resign by mass action for starters. But we must organise for even much more than that. some We must build workers’ power to overthrow the bosses’ class and their various institutions of governance. In its place, assemblies of working people and youth will be built from below with easily recallable representatives who earn the average wages of workers. 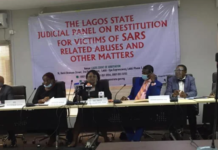 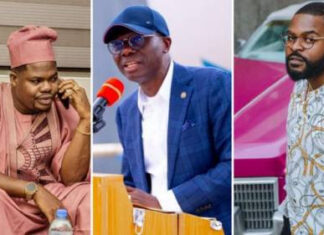 December 2, 2021
*We reject the white “washing” paper!! *We reject all superficial talk of peace without justice!!! At a press briefing on Wednesday 1 December, the Lagos State...