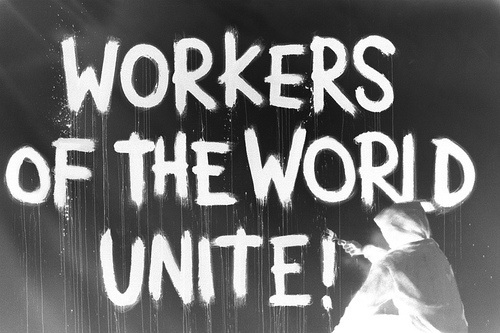 It is popularly claimed that we need the state, the army, police and prisons to protect us from criminals and terrorists.  But the state is only really used to protect the rich, criminal elite – whilst many of us suffer at the hands of the security forces and some are killed.

The army shot dead at least 300 Shiite supporters of the Islamic Movement in Nigeria in and around Zaria in December 2015 (according to Human Rights Watch).

At least nine people were allegedly killed and 18 injured by the Joint Military Task Force (JTF) during a mass pro-Biafra protest in Onitsha in early December last year.  At least another 17 were killed in the same city in late May, according to Amnesty International. The leadership of the Indigenous People of Biafra claim more than 50 of their members were killed in the latest events.

In addition, to such mass killings by the army, the police are also regularly involved in torture and killing suspects.  A report from Amnesty International in 2009 concluded that, “Extrajudicial executions, other unlawful killings and enforced disappearances by the police are widespread and go largely un-investigated and unpunished.”  There is no reason to think that this has changed recently.

But it is only poor people who suffer from these terror tactics, as the Amnesty International report explained:

Extrajudicial executions, other unlawful killings and enforced disappearances in Nigeria are not random. In a country where bribes guarantee safety, those who cannot afford to pay are at risk of being shot or tortured to death by the police. The families of the victims often cannot afford to seek justice or redress, because they cannot pay for a lawyer or the court fees. In many cases, they cannot even afford to retrieve the body.

Now that the war in the North East has largely finished, the state is still not protecting its citizens.  The food crisis, already killing hundreds of people a day, is poised to become a devastating famine.

The UN says 4.4 million people in the Lake Chad region are “severely food insecure” – meaning they are in need of urgent food aid. Borno State’s farmland – which previously fed Nigeria – has been devastated and abandoned. This will be the region’s third year without a harvest.

The hunger crisis is claiming the lives of poor people even in Maiduguri. The city has doubled in size in two years and now hosts 2.4 million displaced people. Food prices are soaring in the markets, where it now costs N30,000 to buy a large bag of rice.

Nigerian authorities, who maintain tight control over humanitarian and media access to the region, have also been accused of deliberate negligence and attempting to conceal the scale of the crisis.

In June 2016, a humanitarian convoy reached Bama, Borno State’s second largest city. It was recaptured by the Nigerian army in March 2015, but little has been done to help to rebuild the city and support the local people. In a camp of about 25,000 people, mostly women and children, many were starving. MSF found the graves of 1,233 who had died in the camp, 480 of whom were children. More than 3,000 severely malnourished people were evacuated by the state governor to Maiduguri for emergency treatment. Several died en route.

Grema Terab, chairman of the State Emergency Management Agency in Borno, believes the crisis is the result of “total neglect and carelessness on the part of the government”. He said the government was aware of the extent of the hunger, but failed to deliver a plan to tackle it and attempted to prevent media coverage of the issue for fear of embarrassment.

But it is not only the Nigerian state that treats its citizens like this. In neighbouring Cameroon thousands of people have been detained, accused of supporting Boko Haram, often with very little evidence.  At one prison nearly 1,500 people are being detained in a building built for 350. Up to eight people are dying a month. In a report, Amnesty said the suspects died of disease, malnutrition and in some cases had been tortured to death.

In contrast to the state’s attacks against the poor, or at best their neglect, the rich and powerful gain huge benefits.  They are protected by armed guards, often provided by the government.  Their parties are protected by the police and they drive around in huge armed convoys.  Senators are paid more than N350 million a year including a “wardrobe allowance” of more than N600,000 a month. They then go on to loot and pillage the state.

The Buhari government is still not doing enough to stop this corruption and is certainly not reining back the security forces.  He recently appeared in military uniform promising that the army would be used against alleged cattle rustlers in the North West.

Labour Party Does Not Stand for Workers