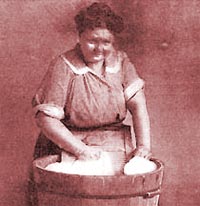 The peasant family, which existed before colonialism across most of Nigeria, was a productive unit. Men were heads of the household, but women and children produced goods in the home that contributed to the family income. They would tend the family plot and look after smaller domestic animals. Women had an important role in the collective life of the village, which was the central economic unit of society.    Colonialism ripped this way of life asunder. The labouring masses were torn from the land and thrown into the new towns and cities that sprang up. Capitalism created for the first time a class of workers who have no control over the means of production. Members of this new class were forced to labour for someone else to earn a wage. Old social ties were broken with the weakening of the extended family relationships and control.

A similar process happened in Britain and other countries with the industrial revolution.  Men, women and children all worked in factories, mines and mills, in horrendous conditions. Women were employed in huge numbers in the textile factories—by 1856 women formed 57 percent of the workforce in the industry, and children made up 17 percent. Women often did the hardest work in the worst conditions. One in eight women in 1850s Oldham (near Manchester) died between the ages of 25 and 34.

The barbarity of capitalism prompted workers to seek sanctuary— and at least a partial relief from drudgery—in the family. Workers began to campaign for a “family wage”, allowing men to cover the cost of maintaining their wife and children. Some feminists have argued that such demands were purely in the interest of men, who wanted to keep women oppressed in the home. But it allowed a family to exist on the wages of one man, where previously three or four members of the household would have had to work to earn the same money. And it released women and children from hard labour.

In the harsh reality of industrial capitalism, isolation in the home was preferable to attempting to both work and raise children. For most women it seemed a matter of common sense to seek a “reliable breadwinner” as a husband as the best chance of security. But this “private family” characteristic of capitalism was not formed purely as a result of pressure from below. An ideological war was waged by the capitalist ruling class to instil “family values” into workers—and to force them to take on the burden of feeding and caring for the next generation of labourers for free.

Housing was built for workers, which was a massive improvement on the hovels city dwellers had first been thrown into. But the homes were laid out according to the structure of the nuclear family. They would be just big enough for two parents and some children, with separate bedrooms and a kitchen, maybe a private yard or small garden with a fence around it. Phrases such as “An Englishman’s home is his castle” entered the vocabulary for the first time.

Of course, many working class women still worked outside the home, but now women’s primary role was seen as that of housewife. Along with this came the characteristics associated with a good wife and mother—caring, passive, submissive. Women’s contribution was devalued again. In a world which only values things in monetary terms, the work that women do for free in the home—cooking, washing, educating—is considered valueless.

It was not the case that working class men were the major winners in the creation of capitalism’s private family. The role of breadwinner was one in which it was all too easy for men to fail. If a man was unable to provide for his family, then he could lose their respect and that of society at large.

Out of the misery of industrial capitalism, the family took shape as both a haven fought for by workers and as an economic and ideological tool of the ruling class. However, the relationship between the family and the economic role of women has not been a static one. As capitalism developed it was to undergo profound changes.

The Selective Enfranchisement of the Gender Bills