Nigerian workers have been plunged into a terrible situation of hunger, suffering and indebtedness. Never before has real wages fallen to the level they are now. When the current minimum wage of N18,000 was passed in 2011, this amounted to $124. And even this was just pittance which was definitely not a living wage.

With the present collapse of the naira to the dollar, the same amount is equivalent to just $60. There is thus an urgent need for the struggle to establish a new national minimum wage to be taken up with all vigour. And we must fight for this to be a living wage.

In November, Socialist Worker made bold to say it was “time to fight for a minimum wage of N66,000”.  Our position was based on research findings made by the Trade Union Congress and statements by the Nigeria Labour Congress.

An average family requires not less than N66,000 per month for mere subsistence, according to the TUC-commissioned research. Speaking last September, the NLC President, Comrade Ayuba Wabba equally pointed out that “when we negotiated the current N18, 000 minimum wage five years down the line the exchange rate of naira to dollar was around N140, but today the naira to dollar is over N200”.

The exchange rate is now well over N300 to a dollar. Ordinarily, without an increase in inflation, a worker now needs N48,000 to buy what the N18,000 minimum wage would have bought when it was passed. But, the inflation rate which was officially 9.3% in September last year is now officially 12.8%, the highest in four years. We are thus facing a double squeeze on our livelihoods as workers. This is also worsened by backlogs of salaries.

The Nigeria Governors’ Forum flew a kite late last year that they would want the minimum wage to be reduced instead of being increased. Their excuse was that state governments were insolvent and could not pay. The trade unions response was very encouraging. The NLC described the governors’ statement as a declaration of war against workers and both NLC and TUC vowed to organise a mass campaign for an upward review of the national minimum wage.

It is mandatory, as stated in the March 2011 National Minimum Wage Act, for the minimum wage to be reviewed within five years. 2016 is about entering its second half, and we are yet to start this grand battle. The governor’s declaration of war shows that we have an uphill task ahead of us, to win what is a legitimate right even by the exploitative standards of capitalism.

To win a living wage as the new minimum wage, this year, requires that we start the fight now. The best time to plant a tree, as an old Kanuri saying goes is twenty years ago. The next best time, if it hasn’t been planted is now. This is particularly so as recent history shows that even after a new minimum wage is arrived at, it will still take struggle to have it implemented.

As working class activists, we do not just want better wages. We realize that the wage system is one of enslavement of working class-people. It is our labour that creates wealth as the NLC motto states. The bosses skim off a sizeable portion of the value we create with our labour power, paying us as little as they can get away with giving.

Wages as a rule, including the juiciest, cannot be just. By wages, we do not include “salaries” of representatives of capital, who as chief executive officers, directors, managers and the cabals of elected or appointed public “ministers” and “servants” also “earn” some form of monthly remuneration, in millions of naira. They are “salariat” representatives of the bosses’ class. The wages of a worker represent his enslavement to those who control not only his labour but the product of the labour of workers past; the owners of capital.

As the motto of Nigeria Labour Congress reads; “labour creates wealth”. But this wealth is appropriated by capitalists who own the means with which labour power is put to work in creating this wealth. Since we have no means of production and must eat, pay; house rents, transport fares, electricity and sundry bills, in short, since we must live, we are left with no option but to earn a livelihood, that is seek for work to earn wages which represent a mere fraction of the worth of what our labour generates, from the employers.

With the generalisation of capitalist production in 19th Century Europe, the exploitation of wage-slaves, which basically is what we workers are, was done with such ruthlessness that workers could see they had no choice but to combine and with their collective union strength demand and fight for improvements in their working conditions and standards of living. Trade unions emerged in disregard of the law, to champion their struggles. Better wages was a cardinal part of these struggles.

Social reformers and ideologies of different hues as well arose to demand, for some; fairer wages and more decent conditions. Others realised that capitalism which is the bedrock of the wage system cannot be a basis for resolving the fundamentally exploitative nature of the wage system. Not surprisingly, most of the social reformers who called for “fairer wages” were representatives of capital.

Quite a number of them were very wealthy man with factories who feared that with the extent of bare-faced exploitation and oppression which the workers faced, they might be pushed to the wall of revolt and considered such palliatives as they proposed necessary to dampen mass anger that could lead to revolution and the overthrow of capitalism.

It was such spirit and in response to the struggle of workers that a minimum wage was introduced for the first time in 1894 New Zealand as a baseline of remuneration to protect the least paid workers who were considered the hungriest and thus the most likely candidates for being the angriest.

After the Great Depression and the manipulative designs of Mr. Keynes to introduce reforms from above towards arresting revolution from below -with mass unemployment, hunger and homelessness driving millions of workers onto the streets in defiance and rage-, quite a number of countries in the West introduced the minimum wage. By 2006, according to the ILO, over 90% of all countries on the planet had instituted the minimum wage.

In Nigeria, the history of struggle for minimum wage started as a struggle for enhanced “cost of living allowance” otherwise known as COLA in 1942. The climax of the struggle for COLA was the historic 1945 General Strike led by the indomitable Michael Imoudu, Labour Leader Number 1. The workers won after a long drawn strike that lasted for 44 days.

In 1964, the second General Strike marked Nigerian workers’ struggle for a living wage. The Adebo Commission in 1971 could however be considered as the first step by the Federal Government to institutionalise minimum wage in response to the struggles of Nigerian workers. But even after that, it always took mass mobilisation for the minimum wage to be increased. The 1981 general strike which led to the legalisation of minimum wage, years after it had been effectively a reality is also a clear inspiration for us that we have to fight now.

The trade unions must resist the temptation of succumbing to blackmail by the politicians about inability to pay. This is a cock and bull story for many reasons. First, there is more than enough money to pay workers’ much better wages despite the fall in revenue from oil. The problem is that the bosses’ priority is to accumulate more money and not improvements in workers’ living standards. If elected and appointed public officers are paid the average wages workers are deemed to earn, and loopholes of corruption are blocked, paying a living minimum wage would be the simplest thing in the world.

Second, the struggle for better wages is a struggle against social inequality. Reducing the economic gap between the rich and poor working class-people through steeped progressive taxation would free resources for paying better wages.

Third, tying minimum wage to anything less than its enabling workers to meet their basic needs is wickedness. It also does makes the APC government’s commitment to stamping out corruption seem hollow. If the take home pay of a worker cannot take her/him home, there is the strong temptation to pursue any means of augmenting it.

Organised labour bent backwards almost to the point of breaking when it accepted N18,000 as minimum wage in 2011. We are at a critical juncture. This is the time to launch a massive campaign for a new minimum wage, which must be one that meets the basic needs of workers. Socialist Workers League reiterates its position that this should be N66,000. Organised labour must seize the bull by the horns and lead the fight for a living wage NOW! 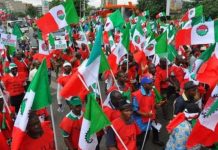 Ngozi Okonjo-Iweala Is a Bosses’ Brand