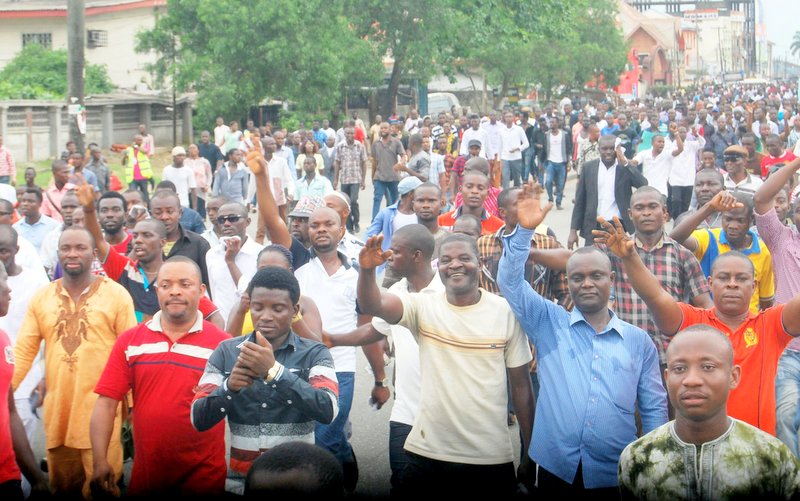 Communities, youths and artisans have demonstrated to protest poor and irregular power supply, accompanied by outrageous bills, across Nigeria over the past four months. These protests have spread across: Edo, Lagos, Osun, Ebonyi, Enugu, Ekiti, Ondo, Delta and Kwara states, as well as the Federal Capital Territory, Abuja.

Electricity workers, joined by other trade unions’ activists have also joined the fray of this wave of struggle demanding better working conditions, an end to casualization and dismissal of staff and the right to organise members in: Plateau, Gombe, Bauchi, Nasarawa, Benue, Rivers, Cross River, Bayelsa and Akwa Ibom states.

The Federal Government claimed that the privatisation of the power sector in November 2013 would result in better service delivery. The converse has been the case and this is why the working people are restive.

After investing over $20bn in the sector, it was sold at the rock bottom price of just N530bn to those who obviously “made” their money from our collective wealth when they were in power like Generals Ibrahim Babangida and Abdulsalam Abubakar who are both former heads of states and their cronies like Aliko Dangote, the richest man in Africa and a friend to any government in power.

The federal government has also bailed out these private firms up to the tune of N213bn last year. But what has been the result of all these? The quantum of electricity generation declined from 6,000MW before privatisation to just 1,300MW by May, 2015. It has currently increased to about 3,800MW, but this is still way off the need for 10,844MW more, required for the country’s population.

The Distribution Companies (DISCOs) have thus repeatedly claimed that the poor generation is what hampers their delivery of power supply. But, this has not stopped them from charging crazy bills, even for power not supplied. The current struggles are making it clear that ENOUGH IS ENOUGH! The sweep of the protests and their intensity show the depth of resistance emerging around the mass rejection of the exploitative rent-seeking strategy of private sector-driven electrification.

The earliest manifestations of this mood were in Benin City, Edo state, barely three months after the privatisation. Youth activists, including members of the SWL organised several demonstrations on the platform of the Edo Civil Society Coalition (EDOSCO) against the Benin Electricity Distribution Company (BEDC) demanding an end to the N750 fixed charges and high bills for epileptic power supply.

But the anger was seething across the country all this while. It burst out this year. In Lagos, there were protests in several communities. Community Development Associations and youth groups in Ifako-Ijaiye, Akinola-Aboru Ajegunle and Isolo organised mass protests against the EKODISCO and Ikeja Electricity Distribution Company (IEDC) between May and August, in many instances returning their bills to the distribution companies.

Young residents of communities from Agege, Oshodi and Mafoluku took the battle to the Lagos State House of Assembly, on the platform of Youth Alliance for a Better Nigeria. The leadership of the State House of Assembly choose not to grant them audience. But they ground all vehicular movement around Alausa, the seat of the Lagos state government, for hours.

In Isolo, more than 25 streets were disconnected because of the mass protest and return of bills, at the beginning of August. But the spirit of the residents remained high as they refused to give in to such blackmail. A similar action was taken by the DISCO in Omu-aran, Kwara state after protesting women and youth returned the crazy bills they had been served by the Ibadan Electricity Distribution Company (IBEDC). But their disconnection by the company only unleashed a new round of mass demonstrations.

Students of the Federal Polytechnic Ede also led artisans, traders and other residents in a protest march against the IBEDC, in July, after two months of power outage. Residents of Aramoko-Ekiti and Erio-Ekiti which have been in darkness for six months, but still receive electricity bills from BEDC trooped out in their thousands as well, blocking the busy inter-state highway that passes through the two communities, in the second week of August.

The monarchs of both adjourning towns led the demonstrations. This was basically to ensure that the boiling mass anger did not spill over into bloody confrontation with the state. The state deputy governor, Dr Olushola was quick to arrive at the demonstrations and tried to pacify the crowds, with empty promises that the matter would be addressed.

In Enugu and Ebonyi states, the mass anger did spill over against the Enugu Electricity Distribution Company (EEDC). In May, students of the University of Nigeria Nsukka took over the Nsukka Unit of the company after several days of power outage. They had levied themselves in 2010 to get a transformer but power supply has been epileptic and yet they are issued “terrible bills” as their spokesperson put it. Their action was just a foretaste of what was to happen in the neighbouring Ebonyi state by August.

Youths in Afikpo, Unwana, Ozizza and Amasiri towns, covering two legislative constituencies in Ebonyi state took their destiny in their hands against EEDC after seven months without electricity, during which they continued to receive bills that they were expected to pay. They simultaneously barricaded every entry point into these towns, shut down banks and markets, and marched on the EEDC Business Unit in Afikpo where three vehicles were razed down. Maria Nwachi, a legislator from one of the constituencies was suspended by the Ebonyi State House of Assembly for joining the popular protest!

Hundreds of youths in Ondo town as well refused to be cajoled. When they were refused entry into the premises of the BEDC Business Unit in the town where they went to express their angst at continued power outage, they pulled down the fence of the building and chased out everybody from the building including the Business Manager. It took the combined action of the Nigeria Police and the Nigeria Security and Civil Defence Corps to dislodge them.

There are several lessons to learn from this spreading wave of resistance. Probably the most important of these is that working people and youth are fed up with the current state of things and we are ready to fight for real change. But the current reality of the power sector is a clear statement of the failure of the privatisation of the power sector in particular and profit-driven development, in general.

There is the need for us to unite this emergent national resistance. The Senate’s recent resolution that the fixed charge of N750 per month be done away reflects the fear of the bosses that this emergent movement will unite and deepen its demands. We must go beyond fighting different DISCOs, which amount to facing the symptoms to more fundamental demands towards system change.

A primary demand in this regard would include re-nationalisation of the power sector. But this alone is not enough. The failure of NEPA/PHCN lies in the fact that they were run by the bosses and eventually rundown. The re-nationalised power sector must be under the democratic control and management of workers and the communities that consume the electricity generated and distributed.

The bosses are likely to reject this. Thus, the struggle for electricity supply that works for the working people cannot but ultimately be part of our struggle to overthrow the capitalist system and build socialism, with workers’ power. We thus have to generalise our protests and organise not just to have a better electrical power sector, but to win political power.

This requires building a nationwide working people’s party anew, with a fighting programme for our self-emancipation. And that is why the struggle for the soul of the Labour Party is one that we must all be part of. The people united can never be defeated. Such unity requires organisation and confrontation with every single form of exploitation and oppression of the working people. The spreading protest against epileptic power supply and crazy bills is s sharp reflection of this. We have to build on this to win. Forward Ever! Backward Never!!

Why Is Cross-dressing A Problem for Legislators?

November 29, 2022
The passing of the Students Loan Bill by the Senate in November signals dangerous years ahead for working-class families and their wards who aspire...