al-Shabab and Boko Haram; two monsters of the system

The militant Jihadist group, al-Shabab killed 148 students of the Garissa University College, Kenya, on April 2 by. It was the worst attack of the sect in Kenya, since 2011 when the country’s army entered Somalia to contain al-Shabaab. Like Boko Haram in Nigeria, al-Shabaab has waged a relentless guerrilla war against the Kenyan state claiming lives, after attacks were launched by governments that envisaged quick victories. The origins and evolution of the two armed sects lies in the crisis of capitalism and the politics of the ruling class.

Al-Shabaab means “the youth” in Arabic. It emerged in the early 2000s as part of the “Islamic Courts Union” (ICU) during the series of Civil Wars Somalia was thrown into after the fall of the brutal dicator, Siad Barre, in 1991. Barre whom the Nigerian government granted asylum for the rest of his life was a puppet of United States imperialism during the Cold War. He smashed the working class movement and various manifestations of resistance from below, building a totalitarian dictatorship. When he fell, the state collapsed. The country became several battlegrounds of warlords.

The returning capitalists supported the ICU (which included al-Shabaab) as a modicum of law and order on the basis of Sharia. The United States, which had lost interest in Somalia after the Cold War returned to the region in full force after the 9/11 terrorist attacks of 2001. Somalia had been a hotbed of Islamist radicalism and was thus part of the sites for its “war on terror”. It tried to strengthen the Transitional National Government formed by the dominant factions of the Somali ruling class in 2000. But securing stability in the country has remained a mirage, even with the military African Union Mission to Somalia (AMISOM) with heavy Ethiopian presence, since 2007.

The Kenyan army’s incursion into southern Somalia in October 2011 was presented as an effort to stop the kidnapping and killings of foreigners by al-Shabaab, which threatened the country’s tourist industry. But the actual sub-imperialist reason was to establish a new buffer state in the Juba region of Somalia that it intended to call “Jubaland” or “Azania”, with a former Somali minister of defence as head of state. This was unsuccessful and rather triggered a war with al-Shabaab which demands that Kenyan soldiers leave Somalia.

The problem appears as one of security. But just like the scourge of Boko Haram in Nigeria, defeating al-Shabaab simply with military means is nearly impossible. Heightened “security” also means laws and practices that will strengthen the state against not only militant Islamists. “War on terror” is often a pretext for repression of revolutionary forces, as the ruling class rallies “the nation” to defend the fatherland. The threat of President Uhuru Kenyatta to close the refugee camps where 450,000 displaced Somalis live will also constitute more problems than solution.

The tragedy of Somali which birthed al-Shabaab can be traced to capitalism. Defeating militant Islamism cannot be solved on the basis of the same capitalism. It requires workers’ power, building a socialist system. The revolutionary struggle that this implies can be waged only by the poor masses led by the working class. Trade unions and the labour movement as a whole in both Kenya and Somalia have to educate and mobilise the mass of the impoverished poor people in the region against both al-Shabaab and the bosses, to curb militant Islamism and disperse possible illusions in a solution to the problem on the basis of capitalism.

#EndSARS: Why the Barbarians Want War

October 14, 2021
It will be a year since the #LekkiMassacre on 20 October.  That day marked the height of the worst bloodletting to halt the greatest... 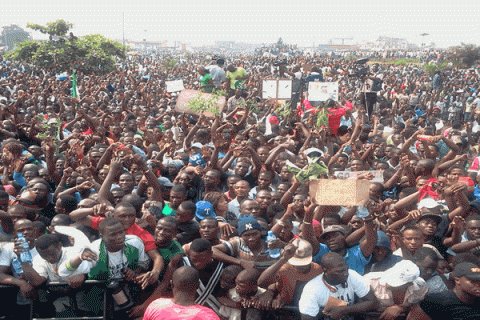